By Team ManAndMotor - 13-03-2021 05:28 PM
The car first made its debut in India back in 2019 and was expected to arrive in 2020. However, the plans had to be postponed amidst the pandemic and the subsequent lockdown. Ahead of its launch in the Indian market, Audi has dropped its first teaser video of the upcoming all-electric SUV from Germany.
Both the Audi e-Tron and e-Tron Sportback receive the same underpinnings. However, the Sportback as the name suggests features a redesigned rear profile, along with a coupe-like sloping roofline. Internationally, Audi offers the e-Tron in a choice of three variants: 50, 55 and S; all offered with ‘Quattro' all-wheel-drive system as standard across. The company, however, is yet to inform the variants which will be making it to Indian shores.Speaking about the powertrain, the e-Tron SUV and Sportback models are powered by the same motor and battery pack configuration. This includes a 125kW electric motor at the front and a 140kW motor at the back. The dual motors are further paired with a 95kWh lithium-ion battery pack. 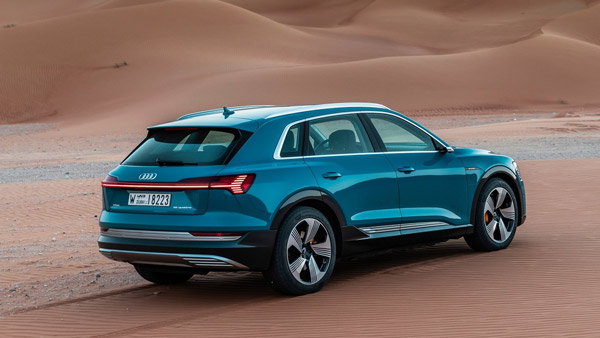 This offers power and torque figures of 355bhp and 561Nm of peak torque, respectively. The car also comes with a boost mode, which increases the figures to 408bhp and 664Nm of peak torque. The e-Tron also claims a 0 - 100km/h sprint in 5.7 seconds while reaching a top speed of 200km/h. The electric SUV also claims a maximum range of 452km on a single charge. The Audi e-Tron and e-Tron Sportback come with both standard and fast-charging capabilities. While the standard charger takes 10 hours to charge the SUV to 100%, the DC fast-charger charges the e-Tron from 0 - 80% in just 30 mins.