When we talk about automotive history, there are very few brands that have a history as rich and as old as Citroen’s run of manufacturing cars since 1919. For example, two of the world’s biggest automotive manufacturers today – VW and Toyota – came into existence much later than Citroen. But, of course, most Indians are not very aware of the brand, and that’s true for most French automotive brands, with the exception of Renault which has carved a niche in the Indian market. However, no longer able to ignore the growth that India has been witnessing, Citroen has finally made an entry into the Indian market. But, with a quintessentially French approach towards cars which is quite different from what Indian customers are used to, can Citroen’s C5 Aircross strike at the heart of Indian car buyers? Well, let’s find out.

A fascinating aspect of Citroen’s history is how much cutting-edge technology has been developed by the brand over the past century. This, of course, begins with the Traction Avant – which, in 1934, was the first mass-produced car to feature a crash-resistant monocoque body, alongside independent front suspension and front-wheel drive. This was followed up by the iconic 2CV which, with its quirky design and suspension designed to deal with the lack of good roads in Europe after WW II, became an icon in itself. Of course, for me, the highlight of the Citroen lineup has been the DS. An iconic car that at its launch nearly 50 years ago, was so futuristic in both design and technology, that a critic at the time remarked that the DS looked like it had dropped from the sky. Of course, with the gap in technology between brands not being as large as it used to be half a century ago, Citroen’s first offering in India is mostly familiar to the technology that we are used to. But it is unique when it comes to its design and the ethos behind the experience that it promises to offer customers. 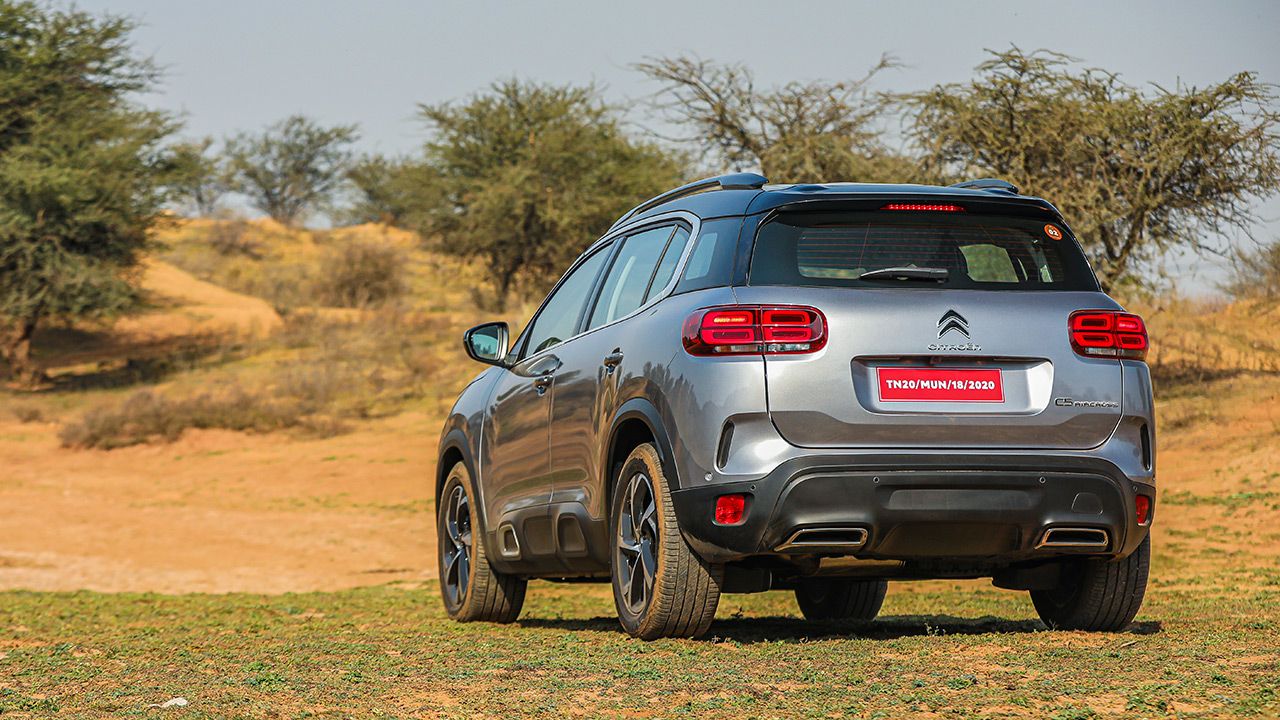 Measuring 2.1-metres in width and with a height of 1.7-metres, the C5 is the widest and tallest product in its segment and interior space in the C5 is quite ample. This is evident the minute you sit inside the cabin and marvel at the amount of headroom available. I would think that even people measuring well over six feet will have no problem getting comfortable inside the C5’s cabin. However, despite measuring 4.5-metres in length, the C5 only offers two rows of seating. On the other hand, with a boot space measuring 580-litres with all seats used, and a humongous 1,630-litres with the 2nd row folded, the C5 does offer the largest boot in its class. The availability of space also continues inside the cabin, which has various cubbies to store your belongings, including a humongous storage space under the front armrest. 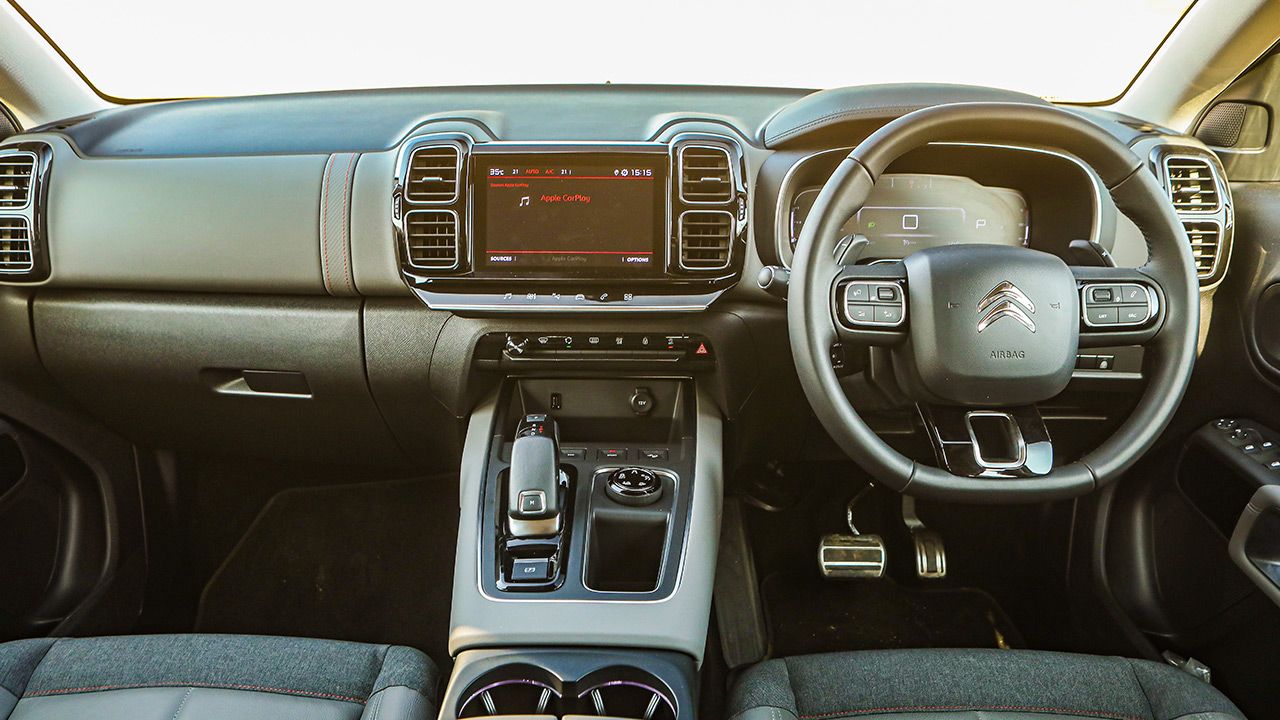 When it comes to powertrain choices, the C5 will only be available in one engine-gearbox combo with a 2.0-litre turbodiesel producing 175bhp and 400Nm of torque and paired with an 8-speed gearbox. Interestingly Citroen claims that it’s the most efficient engine in its class with a claimed fuel efficiency of 18.6km/l, something that will be interesting to measure in a longer test. Of course, keeping its crossover roots in mind, the C5 will be front-wheel drive only. But, to help those who might take the C5 on adventurous terrain, it does come fitted with Citroen’s Grip Control system which provides modes for different road conditions – Snow, Mud, Sand etc. – and also switchable driving modes such as Eco and Sport.

On the road, the C5’s engine is a refined unit and the NVH levels inside the cabin are well controlled. With 400Nm of torque available from 2,000rpm, the C5 responds to throttle inputs quite urgently and one of the best aspects of the C5’s drivetrain is the 8-speed gearbox that shifts quickly and seamlessly. Combine the fast-shifting gearbox with ample torque and power from the engine, and the C5 is a comfortable mile-muncher. Another aspect that’s remarkable is the isolation inside the cabin from the outside world, with extra sound deadening and treatment to the interior, the C5 does isolate you very well. With Citroen’s well-known expertise in suspension tech, it’s no surprise that the C5’s ride quality is quite stellar, no matter the kind of road you’re traveling on. Helping enhance the ride quality is Citroen’s expertise in hydraulics, and each shock absorber of the C5 has an added hydraulic stop to it which improves the ride on bad roads. But unlike some cars with terrific ride quality, the C5 also has very good high-speed stability which makes it an excellent highway cruiser. However, being front-wheel drive only, there can be quite a bit of torque steer if you’re pushing the C5 in corners, courtesy it’s 400Nm of torque and that can be a bit annoying. But, when it comes to the ride quality, the C5 does feel superior to the Tiguan AllSpace and the Tucson – which Citroen says are the C5’s arch-rivals. There are aspects of the car that stand out appreciably. For instance, I quite like the design of the C5 – it’s modern, it has terrific attention to detail, it’s definitely designed by real humans for other real humans and it’s clear the C5 is aimed at a mature set of customers, who value the overall experience rather than the just the butch image of an SUV. Also, after driving the C5 for an extended period, we think the comfort provided by the seats is quite exceptional and that is a major highlight for someone with a weak back. And with 230mm of ground clearance, the C5 handles bad roads, speed breakers, and potholes very effectively.

Conclusion: The C5 Aircross might not be your typical butch SUV, but with quality, refinement and comfort, it certainly is an SUV worth watching out for. But the only con is that the car is offered only with Diesel Engines only.