Renault’s much anticipated compact SUV, the Kiger, is here. Built on the Renault-Nissan Alliance’s CMF-A+ platform that also underpins the Triber and the Magnite, the Kiger made its international debut in India recently, underlining the importance of the model and our market to the French carmaker. Based on a 2,500mm wheelbase, the Kiger measures 3,991mm in length and 1,750mm in width, which is the narrowest for any compact SUV. However, what does help its cause is the large chrome-embellished front grille and the sculpted bonnet that makes it appear wider than it is. The Kiger gets a split-headlamp arrangement with the LED DRLs and turn indicators positioned on top and the main headlamp cluster located below. On top trims, the headlights are all-LED units that are housed in three separate projector units. There’s also a liberal use of black plastic on the front bumper which provides good contrast. You wouldn’t be alone to see the Kiger as an XL-sized Kwid, but on the whole it’s an attractive looker. Renault designed tapering roofline and distinct spoiler element, all of which lends it a SUV-coupe-like profile. The standout feature at the back are the 3D, C-shaped LED tail-lamps with gloss black elements. The boot lid too has plenty of cuts and creases and it also has a chunky rear bumper, body cladding and a faux skid plate. What completes the SUV look is the 205mm of ground clearance, the roof rails which can take loads up to 50 kg and the smart 16-inch diamond-cut alloys.

The Renault Kiger can be had in 6 exterior colours, with a dual-tone paint scheme available across the entire variant line-up. This particular colour on our test car, Caspian Blue. 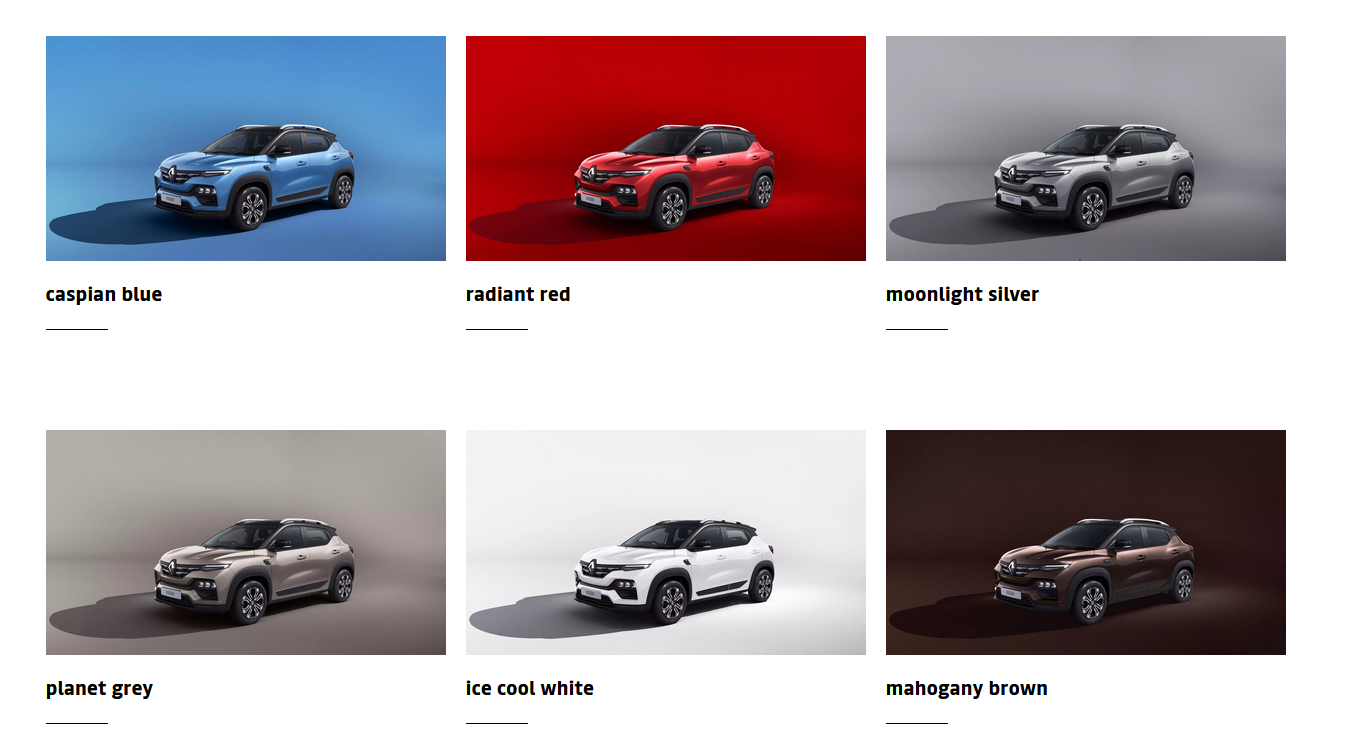 A Peek Inside The Cabin

The car maker has done a fantastic job in the interior. The dashboard is similar in design to that of the Triber’s. An all-new 8-inch touchscreen, takes centre stage on the dash. Most seamless is the wireless integration for Apple CarPlay and Android Auto. In its top trims, the Kiger is also equipped with a high-res, 7-inch digital instrument cluster that displays really cool graphics depending on the drive mode you’re in, which we’ll get to in a bit. Considering the cost, there is no soft touch material in the dashboard to offer a premium feel inside. But Renault has done a good job inside the cabin to make it feel good and more precise in detail. The chrome garnishing on gear knob, piano black elements in the centre console and climate control knobs integrated readouts look pretty premium. But elements like the internal rear- view mirror, sun shades and roof lining feel very basic. Up front, it is easy to find a comfortable driving position and you get a good view out of the cabin. The seats themselves are supportive, well-bolstered and have a cool pattern on them. One of the highlights on the Kiger, though, is the space on offer for rear seat passengers. Headroom and legroom at the rear are both great and the flat floor also makes life easier for the middle passenger. The fold-down armrest is also well positioned, and if anything, it’s that the rear windows are a bit small.

The Kiger is one of the most practical SUVs in the segment, with lots of storage space inside the cabin. This is thanks to practical and large storage spaces like the twin gloveboxes and the central storage space between the elbow box and the gear lever.)  The Kiger also impresses with a class-leading 405 litre boot. The combination of a high loading lip and low boot floor do make loading heavy luggage difficult. However, Renault will offer an accessory shelf that makes the boot floor level with the opening. There’s also the added flexibility of 60:40 split rear seats.

The top trim topping Kiger RXZ offers an Arkamys 3D sound system, keyless entry-go, automatic climate control with PM 2.5 filter, ambient lighting, cooled glove box and power folding mirrors, though the all-important sunroof is missing and there are a few blank switches on the steering wheel, presumably for a cruise control that could be added on a future update. A wireless charger and an external air purifier can be had as part of an accessory pack. Safety features include four airbags, ABS with EBD, ISOFIX child-seat mounts, a rear-view camera and parking sensors. How is it to Drive?

As we push the start button the engine starts roaring is silence only when it Is in idle mode. But it does have the NVH levels which hereditarily comes with a 3 cylinder engine and they can be felt on the steering and gear knob. The Engine feels smoother while driving and revs up harder. Quick response makes the car rush through corners, and climbs. The turbo kicks in at 1700RPM which stays strong till 5000RPM.  Revving harder makes the car noise more audible along with increase in NVH levels. Talking about the gearbox, it is very precise but as of Renault, it has longer throws, but which can be neglected as the clutch is lighter and easier to manipulate. Should I buy one?